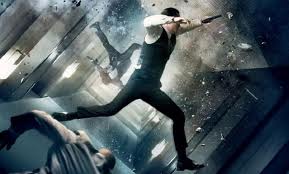 Here’s Ed and I after I got home from seeing Inception last night:

Me: (grumpily) When are you going to get rid of that junk in the garage! I can barely get my car in.

Ed: You want to tell me what you did like about it?

Me: I liked the big climax when everything’s blowing up. Well, not really blowing up. Kind of this domino effect thing happening that was pretty cool. But I can’t explain it. You’d have to see it.

Ed: Why should I go see it if it’s such a bad film?

Me: I didn’t say it was bad. I said I didn’t like it. There’s a difference.

The film was very well made, intricately plotted, and beautifully executed. It creates its own internal system and then plays it out to the nth degree. This is a point I often emphasize about dramatic structure – it doesn’t matter what structural system you use, as long as you have a system, and you stick to it throughout.

But the story was just a big brain exercise. For all it’s wanting to talk about What is real? it wasn’t actually about anything real, as far as I could tell. For all it’s diving deep into the subconscious, I didn’t find any of the psychology particularly meaningful or convincing. And for all of it’s wanting to challenge our minds (or fuck with our minds, as some would say), I kept having this feeling I was being spoon fed a ton of background exposition.

Ed: What are you doing tomorrow?

Me: Well, I was going to write something about this film. But I didn’t like it, so now I’m not so sure.

However, despite my trepidation, poor Ed got woken up at 6:30 this morning by the sound of a pencil scratching across a yellow pad of paper. I had put that pad and pencil next to my bed just in case. And sure enough as my consciousness was coming out of its dream state, my subconscious started coughing up all sorts of vitriol about the film. Here are a couple of samples:

“Who was that stewardess/dream technician lady? I guess her big scene got left on the cutting room floor.”

“That van charging through the streets with the driver shooting backwards out the window was almost like a running joke they kept going back to.”

And: “I’m just getting so sick of all this bang, bang, bang in the movies.”  (I don’t mind exploding things. That’s always fun. But all these people endlessly shooting each other gets old after a while.)

As my consciousness slowly came into focus, my internal discussion attained more sophistication and nuance. I started thinking the big thoughts about art and drama and catharsis and tragedy.

I’m sure Christopher Nolan would like to think of himself as an artist. And I understand that he is wanting to push the medium in directions it has not been taken before. I have respect for that. I firmly believe that a primary function of art is to show us something new. However, this expansion of our consciousness through art needs to be applied not only in the formal realm (as in pushing the bounds of film), but also to the content (as in telling us something new about human nature). In fact, this is possibly what we want most of all – to gain some new insight about ourselves, our lives or our world.

What is it that makes the Mona Lisa the most revered painting in history? Certainly, precision execution is a big part of it. But where the painting transcends is in that look that Da Vinci was able to capture. All the human ambiguity, the implied thought and emotion, the direct confrontation with a confounding  mystery. In so doing, the painting articulates for us much of the ambiguity, contradiction and mystery we feel about our own lives. So it is showing us something new about the medium of painting –  that it can communicate to that depth – but it is also showing us something new about ourselves – we are pretty complex, contradictory beings.  (Have you ever seen the Mona Lisa in person? I have. I wandered the galleries of the Louvre, searching, searching, searching for it. Then, having finally come upon it, I wondered why I worried so much that I might miss it. It is tiny, it’s true, but it reaches out and grabs you, pulls you in and captivates you. At least that’s what it did to me.)

Apologies to Mr. Nolan for putting  his work up against such a high standard. I guess Da Vinci pops to mind since he, too, is a brainy, expert technician. But he achieves this little something extra . . . .

So back to Inception. As I watched the film, I was aware of a few things bugging me. One, as already mentioned, was all that exposition, continually bonking me on the head with information I had to keep track of. But even more bothersome was that I never really felt Cobb’s losses.

First, there was the loss of his children. This is important to the film’s structure because it is supplying his motivation for taking all those huge risks that are driving the plot forward, forward, forward. But it was such a dramatic device, almost cynical in how its used. “Let’s just put in a scene of him on the phone with the kids, trying to communicate with them and getting cut off by their grandmother. This’ll tell the audience that he misses them and wants to get back to them. Okay, that’s done. Now we can get on to all the fun stuff.” I’m sorry, but it just didn’t create the needed emotional impact to support the rest of the film.

Then there’s the loss of his wife. Now, I understand that, at the beginning, Nolan is intentionally leading us away from feeling Cobb’s heartbreak. Or I assume he is, because she was so clearly set up as a bad guy. We first meet her in a “What are you doing here?” encounter in which she must be “dealt with.” Yeah, yeah, I know. This is just one of his dreams, we learn later, and her intrusion is a projection that his subconscious has coughed up. It makes perfect – logical – sense.

The next time we see her, he announces that he doesn’t trust her any longer and then we find out why – cause she walked away when he asked her to hold a rope he was dangling from. On the one hand, this image is a beautiful metaphor for a relationship gone bad. “I’m going out on a limb here and I’m counting on you to keep me safe. Whoops! You failed me intentionally! If I can’t count on you to watch out for me, there’s no point in continuing this relationship.” Indeed, it is not presented in any story context, so, likely, it was intended as simply a metaphoric representation of their marriage.

But it’s so mixed up. She’s pissed at him, but we don’t know why. He’s asking about the kids, so he’s clearly separated from them, and, therefore, from her. We put these together to deduce that she’s a bitter, resentful ex-wife, which explains why she keeps intruding and messing things up. Clearly, we’re not supposed to like her.

However, as the story plays out, we gradually learn the truth about his feelings for her and, ultimately, we are supposed to be in sympathy with his guilt and pain. But the way we learn of his feelings is cerebral. It is being reported to us. We are not experiencing it with him. Thus, we are not feeling it with him.

So why do we need to feel it? There is a reason. And its not just that I’m a sap for gooey emotional stories. I’m not. Stories that are all emotion and no intellect are just as onerous. You need them both because they serve each other in important ways.

Nolan has his characters talk about catharsis, but, based on how the story plays out, I don’t think he fully understands what that means. Catharsis is an awakening, yes. But it doesn’t mean simply understanding something rationally that you didn’t understand before. To be a complete catharsis, you must have an emotional awakening as well.

Catharsis is a tunnel of pain the character must traverse to come out into the sun of both rational and emotional understanding. Othello experiences the pain of having destroyed Desdemona in order to know how much he loved her. King Lear destroys his family to learn how much his daughter loved him. Romeo and Juliet meet their end for their families to witness a great love lost to their petty fighting. But, most importantly in drama, the point is for the viewer to experience the catharsis, too, by feeling it along with the character.

This is what makes the ending in a drama more resonant and satisfying than simply succeeding or failing against a generic enemy. You can do that if you want – just have your story be plot-driven toward triumph – but I think Nolan was trying to do something more. In fact, I know he was because his character didn’t triumph. Well, did or didn’t, depending on how you interpret the ending.

In a way, you could say the film has three possible endings: For viewers who want a happy ending, it appears to be a happy ending. “Welcome home, Mr. Cobb,” says the customs official. And we’re into Cobb’s dream for what he’d like to have happen. He is reunited with his children.

Then there are the viewers who get caught in Purgatory, doomed to spend the rest of their lives saying to themselves over and over again – What the fuck was that about?

What I’m getting at here is that, while the film resembles a tragedy – in the sense that Cobb fails at his quest and everyone dies – the intended ambiguity prevents it from doing the job that tragedy is designed to do in drama. Even the exasperatingly passive and screwy Hamlet is finally forced to face what he doesn’t want to face – that his uncle killed his father – and then rises to the occasion to exact revenge before succumbing to poison. Thus, we fully feel how much was lost and how much was wasted as a result of his equivocating.

Cobb, too, has something he doesn’t want to face – his feelings of guilt around the circumstances of his wife’s death. He, too, makes a terrible mistake that loses him the one he loves. If we’re going to explore the area of “What is real?” it is the emotions that go along with these events that, ultimately, are what is real. The failure to communicate those emotions holds the film back from achieving its full communicative potential.

My guess is Nolan deemphasized the emotional impact because his goal was to make the ending logically ambiguous. So the film makes an interesting brain exercise. But, in so doing, it falls significantly short of giving us any new insight into ourselves, our lives or our world.

You can watch Inception on the following Video On Demand websites: