About one minute into All Is Lost, I had a powerful urge to leave the theater. But that’s just me. I don’t like boats. That I stuck it out is a measure of my admiration for writer/director J.C. Chandor and his first film Margin Call. I decided to put my faith in him that he would not disappoint with this one either. Indeed, having white knuckled my way through my boat phobia, in the end I left feeling I had seen something very pure, very poetic and very profound.

Of course, I then had a powerful urge to put the film under my analytical microscope to discover how it achieves this, even for such a viewer as me who is wholly predisposed not to enjoy it. But how to analyze the screenplay of a film in which so little happens and next to nothing is said? All we see is one guy, referred to in the script as Our Man, doggedly endeavoring to stem the tide (so to speak) of steadily degenerating circumstances. In fact, there would be little to talk about in this film if it weren’t for the ending.

Did Our Man live or did he die? Was that the actual hand of a local fisherman reaching down to pull him out of the ocean? Or was it the metaphorical hand of God pulling him into the afterlife? Was it the bright white of a searchlight that flashed on the screen? Or was it The Light of ultimate salvation? When my father told me this film had sparked a lively discussion in the monthly movie group at his church, I asked him how people’s answers broke down on the question of whether Our Man lived or died. He said about half and half. Interesting. Chandor managed to make a film that is easily interpretable in two opposing directions. That’s quite an accomplishment.

There’s actually no point in arguing about which is true because there is no objective answer. There’s just what it is for you, likely depending on how you score on the sensing vs. intuitive section of the Myers Briggs personality test. Some people focus on what’s in front of them, others see beyond the literal perspective. Personally, I prefer the interpretation that he dies in the end. That I score heavy on the intuitive end of the Myers Briggs scale plays a part in this, no doubt. But I prefer it for story structure reasons as well because at least it offers something new. 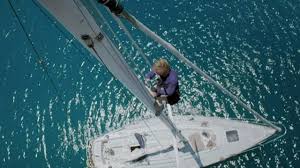 Instead, I was genuinely startled when the screen flashed to white and then went black for credits. What was that? Wait. Maybe it was the white light that consistently appears in first-person accounts of near death experiences. So there’s another way of looking at the drowning option: Our Man dies and enters the after life. To borrow a line from Philomena, I sure didn’t see that one coming!

I think the way it breaks down is this: the die-hard (so to speak) literalists, who, if he had died, would just think he’s dead and that’s it, get to believe that he lived and, therefore have the comfort of a happy ending, while those more cosmically inclined are offered an alternative in which his, by this point rather inevitable, demise is given a denouement in the comfort of an after life.

Having said all that, I’d like to take a moment to point out that the literalist interpretation is actually not altogether without its cosmic elements. You may be more inclined to see a human hand pulling Our Man out of the water, but in dramatic structure terms to have a fishing boat turn up just when he is all out of options actually constitutes a “deus ex machina” (a.k.a. divine intervention) ending, which, these days, is not generally considered a legitimate dramatic device. The fishing boat does not result from any action taken by our main character. It simply appears, as if handed down by God. At least with the metaphorical hand of God pulling Our Man up to Heaven, God is acting more consistently with His own character (as presented in this film). All God has done in the film up until this point is push Our Man further and further towards oblivion. Why should He suddenly save him for this life now?

So it was the afterlife-as-denouement being brought in to provide a happy ending in an otherwise hopeless story that fascinated me as a new idea in this film. However, it later occurred to me that, actually, it’s not so new. The promise of an afterlife as resolution to one’s earth bound struggles goes back to the Medieval Morality Play and, in many ways, is the basis for all happy-ending story structure in Western culture. True, in this film we are not seeing a Good Angel and Bad Angel explicitly battling for Everyman’s soul until he finally chooses the path of righteousness and achieves redemption. Nonetheless, we do see this Everyman battle a series of real-life circumstances, which, in the screenplay, Chandor organizes into three acts titled “Man Against Man,” “Man Against Nature” and “Man Against Self.” Also, while no particular morality is being promoted, Our Man’s opening monologue gives a clear sense that he is anticipating his death and wishing he had lived his life differently.

But, unlike the morally simplistic dramas of medieval times, this 21st century film gives a more layered and refined metaphor for life’s challenges. Our man is engaged in a series of existential battles that feel intimately familiar to us, even never having been on a sailboat off the Sumatra Straits. Who hasn’t, at one time or another, felt unfairly assaulted by a foreign object? Who hasn’t felt tempest tossed at sea? And who hasn’t, despite our best efforts, felt abandoned and adrift on a vast ocean? The film expresses all this authentic human experience cleanly and succinctly in the adventure of one man trying to survive on his own. On a deep level, we recognize the truth of it.

In this way, the cast-about-by-fate story harkens back to Greek tragedy, in which the main character is brought unequivocally to a catastrophic result to give us a sort of dress rehearsal for the despair we must face in our own lives. The idea is that we have a cathartic experience in witnessing others’ misfortune and are left feeling reassured of our survival. But the Greeks also put a high value on the Great Death, so there was dramatic pay off in seeing a main character go down in glory. Today’s audience is not so accepting of death as the honorable result of a battle well fought.

So the way it appears to me, Chandor wanted his film to navigate the dark waters of Man’s relationship to Man, Nature and Self, but didn’t want to alienate his audience with a fatalistic resolution. Thus, we have a story structure that goes down and down and down, like Our Man sinking into the ocean abyss, and then, at the very last minute, does a reverse to come back up in a two-pronged ending. Whether he is lifted into a boat or lifted into the afterlife doesn’t matter as long as we are comforted in the knowledge that all of his struggle was somehow rewarded. In story structure terms, the seemingly opposite endings are actually just the same.

I’m not sure, however, that Chandor intended for this film to be reassuring. Possibly, what we have here is an odd inversion of Greek drama in which, rather than the main character’s demise comforting us that we’re still here, this character’s salvation (whether physical or spiritual) is designed as a herald of how perilously close to the edge we are. (Could he, perhaps, be trying to tell us that we’re on a sinking ship?) A major difference between the Greek and medieval sensibilities was that, in the Classical era, the gods were self-serving and fickle, and the humans just had to learn to deal with that, whereas by the time of burgeoning Christianity, God had become benevolent. This is at the root of our American aspiration for a happy life. We still carry the belief that if we do all the right things, we will be rewarded. And that is why All Is Lost, despite the explicitly portentous title, is a film with a “happy” ending.