Watching Dallas Buyers Club, I saw some curious screenwriting choices being made. I liked the film well enough. Certainly Matthew McConaughey and Jared Leto’s performances were transporting. And, of course, I couldn’t help sympathizing with the subject matter. I have to say, though, I did find some of the metaphoric elements rather self-consciously applied—all those frowning clowns, bucking bulls and fluttering butterflies. But what most concerned me was the bland feeling it left me with.

Looking online I found this comment in a review by Glenn Kenny of rogerebert.com: “I’m trying to come to terms with why Dallas Buyers Club is a somewhat more dry experience than I suspect it wants to be.” Yeah, me, too. This lead me to wondering if that bland/dry feeling had something to do with the odd screenwriting choices I had noticed. So I went to see the film again and took some notes.

The first odd choice I noticed begins with Ron Woodroof (McConaughey) drowning his sorrows at a bar for not being able to procure AZT from Dr. Saks. He recognizes a Hispanic orderly from the hospital a few seats away, approaches the man and takes a seat next to him. The film then cuts directly to Ron loitering in back of the hospital as the orderly comes out pushing a garbage bin. The orderly leaves and Ron stealthily retrieves a bag of pills from the trash. What this cut says is, “You already know what happens between these scenes. We don’t have to show it to you.”

The same type of cut occurs in the scene with Dr. Vass, the expat American doctor in Mexico (How great to see Griffin Dunne on the big screen again!) who has given Ron a regimen of supplements, not approved in the U.S., that has restored his ability to function. By way of thanks, Ron tells him, “You could be making a fortune off of this.” Cut to Ron and Dr. Vass packing the trunk of his car with boxes of pills to smuggle into the U.S. and sell for a profit. Again, no need to fill in details. We can surmise what happened in the interim. (This is what I call the “caper cut.” We’re off on a caper! Can’t pause for boring character-enhancing moments.)

And there’s one more: Ron enters his motel room/office to see a woman being interviewed for intake. Surprised to find a woman among his gay-man dominated clientele, he asks his office manager, Denise, what the woman is doing here. Denise tells him she has full blown AIDS. Cut to raucous sounds coming through the office walls and then to Ron having wild sex with the woman in the motel bathroom. This cut not only says, “You know what happens,” but also serves as a laugh-out-loud punch line.

I get that writers Craig Borten and Melisa Wallack, along with director Jean-Marc Vallee, have made a stylistic decision to take a spare approach to the drama. Maybe they also feel that to spell things out too much is a disservice to the viewer’s intelligence, although I think, in this case, that notion would be a bit misguided. The uniqueness of this story was supposed to be in the element of a bigoted, homophobic, hard-living redneck with HIV who, in order to save his own life, is forced to adopt a more benevolent view. As told in this film, we don’t see any of that transformation happening. Not only are we expected to take on faith the transitions between scenes, but also the very changes that are occurring in Ron Woodroof. All the secondary characters, rather than having any dimensionality or agendas of their own that Ron must deal with, and perhaps be incrementally changed by, come off as poorly utilized foils brought in to simply move the plot forward (or, in the case of the nameless, faceless woman with AIDS, to provide a cheap laugh).

Not reflected here is the fact that each one of these connections—with the Hispanic orderly, the American expat doctor, the woman with full-blown AIDs—is an opportunity to show the pressure Ron is under to change his perspective. He makes a racist assumption that the Hispanic orderly is corruptible enough to get him his drugs, with no repercussions. What if, instead, the orderly’s response confronted him with his own biased nature? Similarly, the expat doctor, who has a checkered past of his own and is now trying to do good outside the system, is suddenly motivated by money into a smuggling partnership. What if, instead, the doctor’s responses were to shine a light on Woodroof’s homophobia and exploitative impulses?

As for the woman with AIDS, if Ron were to have an actual relationship with the first woman he meets who shares his predicament (which apparently is something like what happened in real life), the relationship could have done much to portray his still-developing ability to respect and care for other people. Instead, they create a ridiculous flirtation with a vapid lady doctor that strains credibility, simply to service an overblown external conflict with a bunch of all-purpose bad guys. There was an opportunity in this film to tell a character-rich story of one man’s opening to and acceptance of a part of humanity he formerly had a need to despise. But the actual process of transformation was skimmed over to make room for a lot of forced plot maneuverings with the evil FDA, greedy drug companies and a self-serving medical establishment. 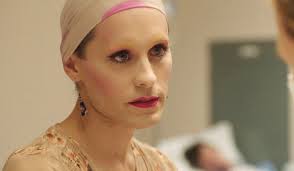 Perhaps the biggest foil of them all is Rayon (Jared Leto), the transvestite, drug-selling partner, who reportedly is a composite of actual characters in Woodroof’s life. Okay, I get it about Rayon being a metaphor for all the gay pathos and weirdness that aggressively straight Ron suddenly finds himself reluctantly aligned with. But I have to say I was taken aback by that scene in which Ron defends Rayon in the grocery store against his friend T.J.’s insults, forcing him to shake her hand. Oh really? He’s changed that much? Funny, I don’t remember seeing it happen. Yet another thing we have to take on faith since the filmmakers are shying away from showing the genuine emotional and inter-relational reality of what it means to be a dying homophobe with no friends left and thrown into mutual dependence with the very people with whom he desperately wants to believe he has nothing in common.

This is the risk I take when I decide to look more deeply into a film that left me feeling moderately entertained (but with a nagging sense of something missing that I might be willing to ignore). The further I go into it, the more dismayed I become until, in the end, my mounting disappointment has worn away whatever positive feeling I had when I left the theater.