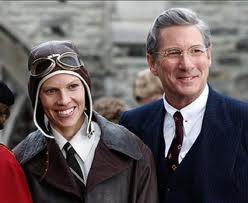 I had high hopes for Amelia. A chick flick adventure film. A strong female protagonist. An important piece of women’s history. And who can pass up Hillary Swank. But, sadly, the film was disappointing. What I call a “walk through.” No running, jumping or skipping in this film. Just a pedestrian stroll to the finish. And, thus, we have another wasted opportunity. I so wish they had gotten it right. But they didn’t.

The makers of Amelia had a problem at the outset: Everyone knows Amelia Earhart came to a tragic end. They decided to handle it by beginning the film with the launch of her final flight. This is a way of saying, “We know you all know about this final flight and what happens in the end. But we’re going to take you back to the beginning of her story and tell you about what led up to it.” And they do, while, from time to time, cutting back to the final flight in progress as she makes her way around the world, visiting exotic locations in Africa and southern Asia, at a relaxed, almost lyrical, pace.

Maybe they thought this would add an underlying tension that would keep the viewer engaged. For me, it had the opposite effect. About halfway through, I noticed in myself an underlying sense of dread. An uncomfortable anticipation of the moment of her demise that kept me disengaged from the movie. When a movie is putting me in such an alienated place, I can’t help but start thinking about what might have fixed the problem. In this case, I began to suspect the writers of Amelia would have done better to begin the story with Earhart already dead.

An old favorite came to mind, Sunset Boulevard, as a correlative example of a film that starts with a dead main character. We first meet Joe Gillis floating upside down in a swimming pool and talking to us from the Great Beyond. As we are then taken back a few months and begin to see his story unfold, we are not engaged in the usual plot-based tension of “Will he live or die?” (I say “usual” because, of course, “life and death” is always the most compelling answer to that fundamental question in drama “What’s at stake?”) In this case, we know he’s dead, so there must be another set of stakes involved to carry the tension of the story forward. Yes, there is the question of “How did he die?” But, ultimately, the question becomes, “How badly did he compromise himself before he died?” The tension is not around his physical survival. It is around his moral survival. And, indeed, he does redeem himself in the end when he, finally, tells Norma Desmond the truth, for which she shoots him. My point here being that, by dispensing with life-and-death as the driving tension, the story is opened up to another thematic opportunity.

Obviously, Amelia is a different kind of story. But hopefully my Sunset Boulevard comparison begins to show how this film could have benefited from introducing her to us post-mortem. She’s dead. Now we don’t have to sit in dread of that outcome and we can instead focus on what the story of her life and her character has to offer us. But then we have to come up with another source of driving tension for the story than simply life-and-death.

Here’s where we find another problem the writers were faced with: She doesn’t undergo any significant character transformation, which means we have a tragedy without a catharsis. I’m referring here to classic tragedy in which the main character has some sort of awakening just before their death. But Amelia Earhart is not King Lear or Othello (or Joe Gillis, for that matter). She is as noble, heroic and full of integrity at the beginning as she is at the end. So the classic tragedy model doesn’t help us. Neither does the redemptive melodrama model.

What, then, do we do with this tragic chronicle of events? Clearly, there is good reason to want to portray her on film. She was an important figure in history. She was a laudable character. She was a model for women’s rights. But how do we make her life into a story that somehow transcends the horror of its resolution?

Here’s my answer: You do it by focusing your dramatic through-line on a thematic progression. She doesn’t change. Her circumstances don’t change. But our understanding of her, or the world she lived in or the world we live in or even of ourselves is changed in our experience of this story.

Easy for me to say, right? But how, how, how do you do that? I don’t know. It all depends on what the filmmakers were wanting to say about her, which also wasn’t quite clear to me. I can see certain things they were trying to bring out – about her relationship with her husband, about her contribution to women’s history, about her passion for flying. But this is where it felt like a walk through. For the most part, those things were being reported through dialogue.

Here’s the question I would have asked: How is Amelia Earhart’s passion for flying a metaphor for all women’s ambition? As a woman, I can’t get nearly as excited about literally flying an airplane (I have fear of heights issues) as I can about feeling like I’m flying through life, climbing to new heights and having a vantage point on a vast expanse below me as I go about doing the things that I am most passionate about. That’s the feeling I wish I could have had as I went on Earhart’s journey with her. That would have made the tragic end well worthwhile.

You can stream Amelia on the following Video On Demand websites: