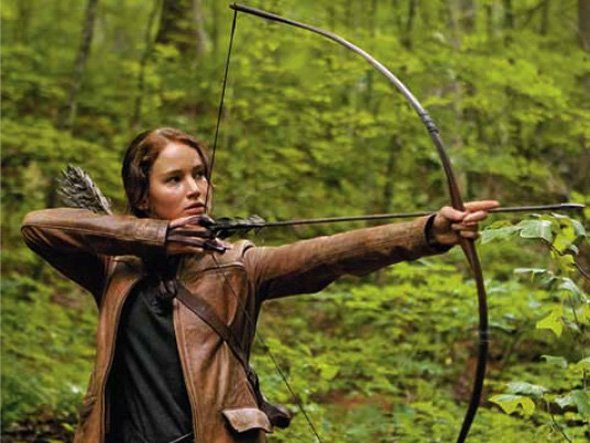 I can get on board with the eye-popping thrill ride of big films like Spider Man or Iron Man as much as the next guy. Just turn off the brain and go. But once in a while comes a big film that purports to have greater meaning, like Avatar banging us over the head with it’s pro-environmental, anti-corporate themes, and Inception claiming to explore the nature of reality. These start to irritate me. Not because they ask me to think, but because they promise something to think about and then don’t pay off. Or not enough, anyway.

Now we have The Hunger Games, a big film whose mere premise demands some serious thinking since the idea is too disturbing to accept by itself. Teenagers put in an arena to fight to their death? Watching violence only provides its thrill-ride fun when we have a clearly identified bad guy (as, for instance, a superhero fighting an evil mastermind to save the city from destruction). Adolescent children picked by lottery hardly qualify. So there’s some higher point being made, right? We hope? Or is this some kind of sicko splatter film?

It’s so weird that The Hunger Games starts out like a remake of Winter’s Bone, the very small film that catapulted Jennifer Lawrence into the consciousness of the film industry. It’s about a dirt-poor fatherless family in which the oldest daughter has to forage for food for the younger siblings because the mother has all but disappeared into some kind of depressed catatonia. I have to applaud the big film producers for recognizing Lawrence’s capabilities and I certainly can’t blame her for taking the part. But is this typecasting in its baldest form, or what?

Winter’s Bone is a film that gives loads to think about, portraying as it does a meth-making subculture in the Missouri Ozarks in which the men have devolved into bombs-waiting-to-explode and the women barely hold together the social ties through their maladapted caretaking. The violence in this film is not designed to give us a thrill. It is too real for that. And, in the end, a triumph is achieved in spite of it. But the genuine food for thought is in the emotional violence portrayed, perpetrated as often by the caretaking women as by the careless men. Even in such extremity of circumstance, or perhaps because of it, it’s not difficult to see echoes of our larger world being represented.

But back to The Hunger Games: my initial response was mixed. I wanted to like it, strong female lead struggling to prevail against political oppression and all. But whenever I’m confronted with an over-hyped film, I can’t help feeling resentful towards it. All the noise makes me want to not like it, so I can defy the bombarding messages telling me I must see it and I will like it. Perhaps I’m feeling the fine line between marketing hype and totalitarian mind control. Ironic, isn’t it.

Now that I have gotten some distance from the hype and have had time to reflect on the film itself, I have had to conclude that it’s a pretty poor representation of a not-half-bad book. When I was first hearing about the film, and reading all the complaining from critics about an unimaginative directing style, I thought, “I bet the director made a decision to be very faithful to the book, to do little more than illustrate it.” Maybe he was even told to by whoever hired him for the job. This would make good business sense. Book sales are a sure thing. Arty visual interpretation of a dystopian world is not.

But dystopian worlds demand highly conceived visual interpretation. That’s the gift that film has to bring to futuristic fiction. That’s the surprise and the delight of watching the story unfold on screen. It mustn’t be squandered. We know too well the degree to which it’s possible because we’ve seen it done so many times before – Blade Runner, Brazil, The Matrix for starters. That’s what we go see futuristic films for. But we didn’t get to see it here, at least not up to the standard we have been led to expect.

I would have loved to see Stanley Kubrick directing. But he wouldn’t have taken it on. He knew better than to adapt bestsellers. Then how about Alfonso Cuaron for that Children of Men-style treatment? Even Ridley Scott would be a good bet. Here’s a radical idea – Pier Paolo Pasolini. (Ever seen Salo?) But, sadly, he’s been gone longer than Kubrick. Okay, I see their problem. But did they really have to go with one whose record so clearly demonstrates such a squeaky clean aesthetic?

No doubt their nervousness about teenagers killing teenagers got the better of them. And they were right to be nervous. It’s one thing to pose such a conceit in words on paper. It’s quite another to make it visual on a larger-than-life screen. Here we have the ultimate illustration that a thousand words can pale next to the power of one picture.  But, with book sales through the roof, business dictates that it’s a risk worth taking.

I have read the book since seeing the movie and, thus, can confirm what so many others have said – It is gripping. But I also learned that the film was not as entirely faithful as I had assumed. The book is more political than the movie and it has more emotional content. Granted, it’s harder to communicate these on film – political content being somewhat abstract and emotional content being internal – but far from impossible. It’s simply a matter of finding a way to manifest the ideas and feelings in an externalized form that is visual and active. In fact, solving that puzzle is the fun part as far as I’m concerned. And neither did this movie have to create it all from scratch. The book dishes up at least a couple of great opportunities that the movie declined to utilize.

The most political character in the book – an “Avox” girl, which is some kind of servant class made up of former defectors – does not appear in the film. Katniss recognizes her from having witnessed her capture while hunting in the woods and causes a stir among her support team. This is the most direct indication that just under the surface of this society there is rebellion brewing and the government is putting considerable resources into keeping it down.

There is also a great scene in the book of Katniss, at the end of a brutal day of training, returning to her lavish room in a state of rage and smashing everything in sight. Such spontaneous mayhem and the resulting shambles would have been very satisfying to see on the screen. Fittingly, it is the Avox girl who then appears and helps her clean it up before anyone discovers her deviant outburst. But, no, they skipped over that, too.

What would motivate the producers to diminish the political and emotional content of this story? Here’s my guess: They wanted to make an action film. We got a bestselling book here, let’s make a blockbuster movie. In fact, we’ve got to be extra careful that it doesn’t go the way of Children of Men – all arty and gloomy. So we have to punch up the action as much as possible and weed out anything extraneous.

Problem is, relative to today’s action film standards, there is not that much action in the book. And the producers didn’t really have the option of adding more since that would only mean piling more abuse on these poor, hapless teenagers who are victims themselves of a larger evil. So they had to mine every little scrap of written action they could find, which was only barely enough for the film to succeed as an action vehicle.

What they skipped over in the process was any meaningful focus on Katniss’ internal state. If not for Lawrence’s smoldering performance, we would have nearly a blank slate before us.  The book, on the other hand, includes, as most books do, a ton of internal monologue – her deflating fears, her fuming resentments, her dips into faltering confidence, her aching desire to be home again. And she has a progression in the course of the story. The killing arena is a metaphorical backdrop used to provoke the beginnings of a political awakening. By the end of the book, Katniss is getting just the first few impulses not to passively accept the oppressive political system in which she lives. At the end of the movie, on the other hand, she is simply surprised to learn she has pissed off some highly placed people.

What I wish the producers had a better understanding of is that the many pages of printed words spent on deepening Katniss’ character needn’t translate into as many minutes of screen time. Remember the earlier ratio described? One thousand words/one picture? In fact, the book is so compact, it seems to me there may even have been room for the film to expand on it. But my sense is they had no confidence this could be done while maintaining the rhythm and pace of an action film. Either that or character depth just isn’t on their radar.

I want to believe that the success of this film demonstrates a readiness among today’s viewers for more substance in their action fare. I am not cynical enough to think that people are flocking to theaters for the thrill of seeing teenagers kill each other. I think they are drawn in by their awareness that the premise can’t stop there. They want to see what larger point is being made. But the producers underestimated the audience and, thereby, soft-pedaled the thematic elements. They didn’t lose much by doing so. The audience is hungry enough that even weak thematic content will satisfy them. And they’ll tell their friends to see it, too.

But the film lost a lot. It could have become an ominously reverberating dystopian classic adapted from a not-half-bad book. Instead, we’re stuck with a watered-down illustration of a gripping page-turner. I can only hope that at some point in the future someone will remake the film with enough courage and fortitude to do justice to its strong female lead character.

You can watch The Hunger Games on the following Video On Demand websites: