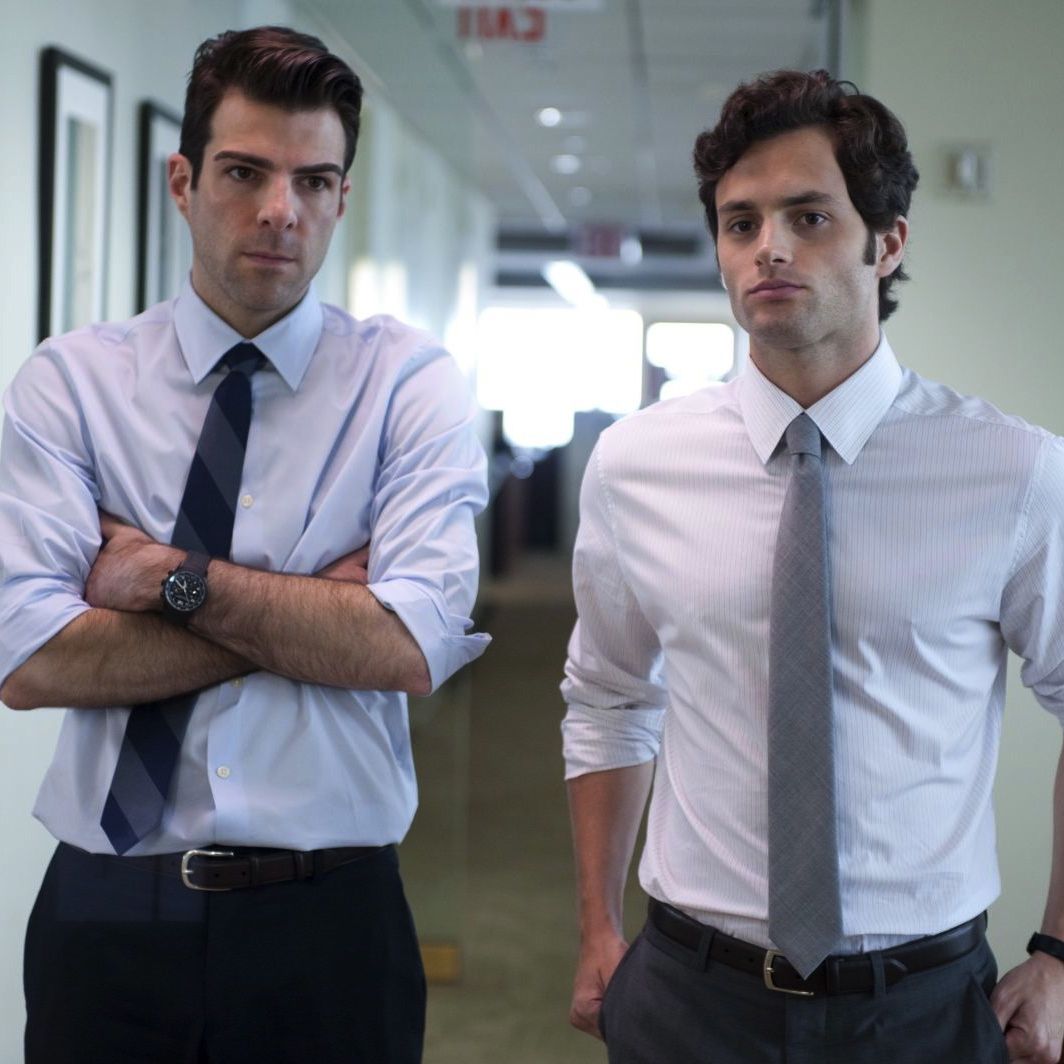 Here’s a film that’s so verbally sharp and culturally engaged, it could almost be a play. Come to think of it, it even has all the classical requirements of playwriting: it happens largely in one location, in close to a 24-hour time frame and it has a king in it. Or the current day equivalent – a corporate CEO.

For my money, the measure of it’s fundamental movie-ness is if you were to take a scene, any scene, from the film and analyze it the way I demonstrate in my article on The Ides of March, I would bet you’d find that every line of dialogue is being driven by an action and each line follows the other with an action/reaction logic. But you have to read that article to know what I’m saying here.

What else makes it a movie? It has the ticking clock tension of an action film: Late one night, a young risk assessor at an investment trading firm, Peter Sullivan, discovers the company is so over-leveraged that their recent investment losses add up to considerably more than the value of the company. Word travels up to the CEO, John Tuld, who wants to do a massive sell off of what are now understood to be worthless assets. The plan must be launched by 9:30 a.m. when the markets open. But he needs sales executive Sam Rogers on board to motivate the sales staff. Rogers is against knowingly selling worthless debt because it will destroy their business relationships. In the end, though, he adheres to company loyalty. When the day is over, the company is still intact, Tuld is looking to make his next bundle, Sullivan has been promoted and Rogers goes home to bury his beloved dog.

See? The plot structure is just like a disaster movie: A young scientist discovers that a meteor is headed straight for earth. The news is sent up the chain of command to the President of the United States, who endeavors to save as many of the nation’s assets as possible, at the expense of millions of lives, under the protests of his first lieutenant, who favors saving lives over assets. But the president’s plan prevails and in the end the nation is still intact and the president, the lieutenant and the young scientist are all still alive. The president is already at the work of rebuilding. The scientist is the new brain trust. And the lieutenant goes off to mourn the dead.

But the difference between this film and a disaster film is that the writer/director of this film, J.C. Chandor, has more to say than simply,  “Watch out! We’re all gonna die!” As the son of a Merrill Lynch trader, Chandor was intimately acquainted with the financial industry at the time of the economic collapse, which gave him a somewhat unique perspective on it.

Remember back in ‘08/’09, when we all learned we had become dependent on an economy not based on building rockets, or building bridges or even digging holes in the ground, but instead on the continual buying and selling of debt that was of little worth to begin with? While the rest of us were stunned and aghast at the short-sighted, self-serving mentality amongst the stewards of our mortgages and retirement accounts, and calling for the monsters to be drawn and quartered in the town square, Chandor had a more nuanced view. What he saw was human beings playing out their human nature in a collective ethic that encouraged them to do so. Thus, to elucidate a more realistically complex picture and bring the monster down to human size, Chandor set out to make a film that would reveal, with neither judgment nor varnish, the inner workings and driving personalities of an investment trading firm as it wakes up to and then copes with the approaching financial Armageddon.

Chandor has a very specific viewer experience in mind. He doesn’t want us to come away with the thrill of having triumphed (as in the plot-based story described above) or the false reassurance of seeing a flawed individual be redeemed (as in a character-transformation story). He also doesn’t want to condone or excuse any of his characters’ behavior. He just wants to paint a picture of a contained culture and he wants us to understand the individuals in that culture as human beings.

However, he has to get us involved with these characters, which is no small task since, as far we’re concerned, they’re the big bad guys in this whole financial mess. We hate them. So what does he do? He begins the film with a Black Friday. It’s not a Friday, but the H.R. people are marching in (who, happily for Chandor, we can immediately recognize thanks to Up in the Air) and the masters-of-the-universe on the trading floor are consumed with anxiety. Thus, these people who we think of as having inordinate power over our lives are right away put at a power disadvantage. They’re afraid of being fired. This is the first step towards making sympathetic a set of characters we are predisposed not to like.

Then we see our main guy, Peter Sullivan, dodge a bullet when the H.R. “counselor” mistakes him for his boss. For the moment, Peter is safe. But seeing an executive being targeted also drives home the point that, actually, no one is safe. We are then introduced to his boss’ boss, Will Emerson, who has run out of Nicorette gum and may soon kill somebody if he doesn’t get more, and then Emerson’s boss, Sam Rogers, who is visibly distraught at having just learned his dog is beyond hope and must be put down. So we have a busload of sympathy creating elements (fearing the loss of a job, parting with a pet, trying to quit smoking) carefully designed to pose these characters as human and get us on board with them.

These sympathy-creating techniques are standard in any well-written screenplay. What is not so standard is having two main characters, Peter Sullivan and Sam Rogers. I usually advise against doing so since, in the great majority of cases, it will only diffuse the focus of the story. But, as with any departure from convention, it can also be used to great effect when done with a purpose.

Clearly, Sullivan is the more sympathetic character at the story’s outset. He is new to the firm, comparatively young, relatively innocent, extremely earnest and he sounds the clarion call of imminent danger. His boy-next-door character is essential for helping us enter into this strange and alienating world.

But he can’t carry us all the way through since he is really just a cog in the wheel of the financial services industry. To give him a heroic triumph would undermine the story since we aren’t going for a music-swelling happy ending. We are going for a this-is-the-truth-and-the-problem-still-exists ending. Sullivan’s personal happy ending is that he still has a job and, indeed, is promoted. But, from the film’s point of view, promoted for what? So he can keep coming up with rocket science formulas with which to play around with our money? This is why we don’t see him getting promoted, it is only reported to us in dialogue and when we do see him, he even looks a little embarrassed by it.

We do get an external triumph at the end of the film in that CEO John Tuld’s plan works and the firm has survived. But I would call it an inverted triumph that brings with it no cause for celebration since it only supports the continuation of our money-shuffling, debt-trading economic house of cards.

So we do need a character transformation, after all, to satisfy the viewer’s need to see that at least something worthwhile has happened in the course of the story, even if it is amidst a pile of wreckage. Thus, we need a second main character who can give us a transformation that will matter in this context. And that’s what we get from Sam Rogers. In fact, the way it’s done here is a nice illustration of my frequent assertion that character transformation doesn’t have to be an “I’ve seen the light!” 180-degree flip. It can be tiny, as it is in this film, and still fulfill its structural purpose.

But rather than feed it to you wholesale (and give it away for those who haven’t seen the film yet), I think I will challenge the reader to view the film with this question in mind: What does Sam do at the end that we can be pretty sure he would never have imagined himself doing at the beginning that indicates a (small) internal shift? And here’s a way to test the answer you come up with: Try imagining the film without that element and see how you would feel differently at the end. (Feel free to e-mail me your answer if you want my feedback on it.)

I could go on and on about this film. I haven’t even talked about the thematic content yet. One thing I love is that, with no triumph, there is no simplified thumbs up or thumbs down proclamation on things. Rather, the film reveals numerous complicated, and sometimes contradictory, facets of the culture it portrays. It tells us, for example, that firms like this demand complete loyalty from their employees but show absolutely no loyalty to them. It tells us that you don’t have to be a “cheater” to be an enthusiastic participant in a set of so-called legitimate practices that will deprive people of their assets. It also tells us that responsibility for this crisis spreads far and wide, including to those who have passively benefited from those practices. And it reminds us that everyone, on some level, needs to believe that whatever they are doing for themselves is also somehow benefitting the greater good.

And then there’s my favorite line of dialogue, which I think sums up much of the film’s intended meaning:

What makes this a great line is not its particular combination of words in one sentence. By itself, the line is meaningless and trite. What makes the line great is all that has happened before it is uttered. Knowing what we know, the line creates a wah-wah-wah-wah expanding insight into the skewed mentality behind the economic collapse. Here’s man about to provoke a massive financial crisis that will devastate millions of lives through lay offs, bankruptcies and foreclosures, not to mention seriously compromising his own business relationships, and this is the best justification he can come up with for doing it.

So that’s how we ended up in this financial mess. We are at the mercy of a bunch of guys who are unstoppably possessed by their passion for playing do-or-die games with money (or maybe “compulsion” is a better word, or even “primordial, testosterone-driven need”) and they think it’s a perfectly legitimate competition because no wars are being started and no one’s getting killed. Or so they have lead themselves to believe.

You can watch Margin Call on the following Video On Demand websites: