Steven Soderbergh has made himself a chick flick. 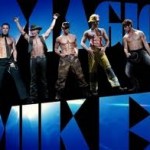 Well, sort of. Having dragged my partner Ed to see it (“The only reason I’m going is because of Matthew McConaughey!”), we found ourselves in a movie theater full of chattering 20-something women. Silly me. Being that it’s telling a man’s story, I thought men might have an interest in seeing it.

Although the screenplay is credited to Reid Carolin, I saw Soderbergh’s skillful hand all over it. Things like keeping us at a distance from main-character-Mike for the first 40 minutes to allow us to come into the world of male stripping through the younger Adam, a lost soul who attaches to the more worldly-wise Mike. We see Adam being drawn into the club, being suddenly thrown on stage, tasting the rewards with pre-dawn partying, being initiated at practice with the impresario Dallas, being outfitted by Mike at the G-string store and, finally, the ultimate commitment, shaving his legs. Adam is our entre to this world, but he is also Mike when he started out. Every stripper was a wide-eyed novice at one time.

Then, very nearly halfway through, suddenly we are following Mike as he swaggers into a loan officer’s cubicle, confident of his ability to get what he wants. He does, indeed, succeed at disarming the young female loan officer, but he fails to get a loan, despite the pile of cash he places on the desk. As we witness his humiliation, our interest in Adam is overridden and we become solidly invested in Mike.

Meanwhile, Mike has met Adam’s older sister, Brooke, the girl you take to dinner before you take to bed. She extracts a promise from him to take care of her little brother. No problem. Mike knows how to do this male stripping thing on his own terms, to serve his greater goal of starting his own custom furniture making business. He can take care of Adam. 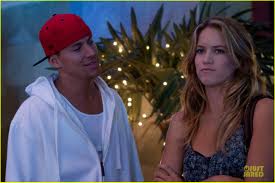 But, in a series of comeuppances, fate mocks his self-assurance. First, with the loan officer, when he learns cash is not king, then when he asks Brooke out and finds it’s not that easy with this chick, then with his sex buddy, Joanna, when he discovers he is a dispensable boy toy, then learning 19-year-old Adam has an equity stake in Dallas’ new Miami venture, then being told by Dallas to learn some new routines cause he’s not getting any younger, and, finally, being confronted by Brooke when Adam overdoses. “I see you!” she exclaims. “You are a bullshit 30-year-old male stripper!”

Soderbergh is very good at keeping the core drama so deemphasized that we don’t see it going by as it passes into our unconscious. What we think we’re watching instead is a rollicking display of male sexuality and the slow unfolding of a love story. All the wild and whacky strip routines are thrilling, hilarious and liberating to watch. The evolving relationship between Mike and Brooke is soft and sweet. Clearly, his salvation lies in her. In the end, there is great satisfaction in seeing him simply hold her hand across the kitchen table.

As the music swelled and the credits rolled, I was a lone applauder at the back of the theater. The 20-something women seemed a bit somber as they filed out. But I couldn’t wait to go home and start writing about it. I jotted a few notes before going to sleep. Then a curious thing happened. I woke the next morning out of a disturbing dream. The precise content was undiscernable. But, from the lingering bad feeling, I knew it was about that film.

Despite all the crazy fun of watching the strip routines, ultimately the film is a downer, a cautionary tale about the deleterious effects of stripping. It has been widely reported that the idea originated out of Channing Tatum’s own experience when he was 18 years old. Clearly, Tatum is baring his soul about his youthful misadventures. Likely, Carolin and Soderbergh got on board for their own personal reasons. It would have to be personal. This is a risky subject for a bunch of straight men to take on. I could barely get Ed to go see it.

I think Tatum wanted to tell the truth about stripping. And I commend him for that. I’d like to think his male stripping experience taught him something about what such objectification does to all beings, male and female. I’d also like to think that his awakening brought with it a greater understanding of what women go through when responded to as a sex object on a daily basis in normal life. I’d like to think he had the urge to share that perspective with those who have never inhabited the kind of sex role reversal that can open one’s eyes to how the other half lives. In other words, I don’t believe his interest in telling this story was to illuminate women on this matter. I believe, instead, his urge was to show the dehumanization he experienced as a male stripper to people who will likely never know it any other way. In other words, his fellow men.

Unfortunately, though, the film is not reaching men. Audience surveys show that the opening weekend viewership was 73% women, almost three-quarters. This is because the studio aggressively marketed the film to women, as if it’s a fun and exciting outing at a male strip club without having to pay for expensive drinks. The film does deliver plenty of fun with stripping in its first half, but, gradually, as Mike’s story unfolds, the cracks begin to show. It’s as if the studio marketers are doing something of a bait and switch on the female viewers who they stood outside the theater hawking so determinedly to come in and see it.

Here’s what the film said to me, as a female 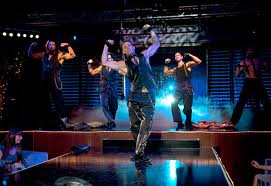 viewer: First, we’re going to give you the opportunity to let loose and enjoy a wild parade of beautiful peacock strutting male bodies flaunting and flirting their sexuality with wild abandon in a perfectly safe container. We’re going to acknowledge that you like to gaze upon a well-developed body of the opposite sex, just as men do, and give you permission to really indulge in that. We want you to have the same enjoyment a man gets to have every time he opens a magazine, passes a billboard, turns on a TV, goes to see a movie or does just about anything in this world. Have a ball!

But, as we give you all that, we’re also going to show you the dark side of sex objectification in a male stripper’s pathos-filled story of awakening to his dehumanization from allowing himself to be exploited for his body.

As if I really need to be educated on this point.

Couldn’t you just let me enjoy the peacock parade for a while without being reminded how dehumanized I feel when I see my own sex being exploited for commercial gain?

See, the peacock parade, by itself, is not exploitation. On the contrary, it is a celebration, on both sides, of the sexual nature of all beings. It is a deep part of us that continually gets lost. Indeed, this world would be a much better place if we only knew how to collectively affirm our sexuality without crossing that boundary into exploitation and abuse.

Brooke is not so priggish as to be put off by the stripping itself. It’s the dollar bills that evoke her revulsion. Later, at the sand bar party, she affirms what he does, saying, “It must be a crazy feeling when you’re on stage. I see why you’ve been doing it so long.” But, by the end, she’s the one who shows him how his identity has become wrapped up in his stripper persona and, consequently, his life is falling apart. Take it from a woman – this stripping thing is going to get you nowhere.

The notion that sexual display is a double-edged sword – when done freely a joyful celebration, but with dollar bills attached a soul-sapping exploitation – is a wonderfully evolved idea to put across. Sadly, though, because of all the shiny bare gyrating abs, those who most need to hear it are staying away.

You can watch Magic Mike on the following Video On Demand websites: