If It Were Up To Me 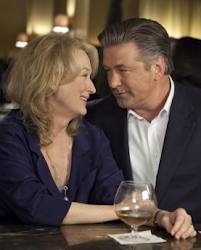 Last night, Ed and I went to see It’s Complicated. Apologies to those who thought it was cute and funny. But I couldn’t believe how bad it was. When I saw Steve Martin lighting up that joint, I thought, “Thank God! He’s going to break out and do his thing!” But it was too little too late to save this movie.

Ed and I walking out of the theater.

Ed: Don’t you think it should have ended with the scene of them [Streep and Baldwin] on the swing?

Me: No. I think it should have ended with her giving him a swift punch in the gut. What an asshole!

Here’s how I would have rewritten that screenplay – First her ex-husband just simply comes on to her. That alone would be enough for her to go back to her Greek chorus of girlfriends and report with glee. For a divorcee who’s husband left her for a younger woman, just to see him coming on to her would be a triumph of the highest magnitude.

So they hatch a plan to pull him into her witch’s lair. They account for every contingency and hitch, elaborately going over every detail. She gets very nervous about it. What if it doesn’t work? But of course when it comes time to pull it off, it’s a cinch. He’s a total sucker for it. She makes him do her every bidding and gets a satisfying feeling of accomplishment.

So she reports back to her klatch. That was fun. Thanks, guys, that was well worth it. But they’re not done, they have other ideas to egg her on with (see, cause they are all divorced too. So they are getting vicarious outlet from this as well). They come up with all kinds of sexual fantasies to get him to fulfill while also planning to get him in all kinds of compromising positions – with his new wife, with his workplace, with his friends. They want to humiliate him every way they can.

And she starts to go along. In fact, she becomes surprised to discover how good at it she can be (like Thelma discovering what a talented criminal she is). Then she starts to really get into it, even surprising her support team with a few innovations of her own. She has him by the nose (so to speak) and they are all getting great delight and satisfaction out of this act of revenge.

Meanwhile, she meets the “mensch,” the sweet, sentimental, lonely guy who is ga-ga for her. (I had a friend who always used to say, “When you have a lover, everyone wants to be your lover.” So that will be at work, making her more attractive to others.) She starts to be friends with him. They pal around. She has a good time with him. In fact, she’s having a good time with both of them. So she starts to think this is the answer – to be friends with these men over here, while having sex with those men over there. What a great idea!

But, of course, the “mensch” is ga-ga for her. So she unwittingly ends up “toying” with him, too. Not her intention at all. He starts to suffer and she starts to feel badly. But she’s not the kind of woman who can sleep with two different men in the same span of time. And she’s not done yet with tormenting her ex. Then her ex starts to want something more. He wants to be friends again. So he starts to suffer. And by this time she has put him through so much crap that even we are starting to feel kinda badly for him.

So ultimately she gets her karmic comeuppance with the mensch and then she has to figure out how to disentangle herself from her ex. And it all culminates in a wild and whacky party scene where everyone gets drunk and finally falls into bed with the person they were supposed to be with from the beginning. Details to be worked out later. Needless to say, she is happy in the end with her new mensch boyfriend and her ex goes home to his wife with his tail between his legs.

Okay, so I’m a little twisted. But what’s wrong with making a full out, no-holds-barred revenge fantasy? Those impulses are entirely human and we should be able to laugh at them. Better to let them out in drama than in real life.

Maybe I could pitch Callie Khouri on writing the script . . . .

You can watch It’s Complicated on the following Video On Demand websites: