A Variation on Theme: Bernie

I recently wrote a guest post for the Filmonomics blog on Slated.com giving an intro to how I analyze screenplay stories. In it, I presented my bottom line definition of a story thus: You have to go from A to B. Then I laid out three ways that can be done: through plot, character or theme. You can read that discussion here.

Of course, now I want to explore a film that does not seem to adhere 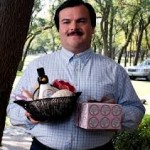 to those guidelines. But ever since I first saw Bernie, I’ve had a gnawing urge to take a closer look at it. While Richard Linklater’s recounting of convicted murderer Bernie Tiede’s true to life story is certainly a fun ride – with Bernie flowing on in endless song, Mrs. Nugent pursing her lips in disapproval, D.A. Danny Buck swinging his bat against crime, and a Greek chorus of local folks’ providing colorful commentary – its final destination does not conform to the typical A to B story progression. No matter. When asserting a set of aesthetic principles, one must also be ready to wrestle with the exceptions.

First a recap: Bernie, the Assistant Funeral Director at Leggett Funeral Home in Carthage. Texas, is viewed around town as a pillar of civic virtue, generous to a fault and about as close to a living angel as can be found. The victim, Mrs. Nugent, on the other hand, is widely recognized to be the most mean, ornery and unpleasant person on earth. When Mrs. Nugent’s oil baron husband dies, Bernie takes the same interest in her he does in all his newly widowed clients. She’s a tougher nut to crack, but he persists and soon becomes her constant companion, enjoying the good life as 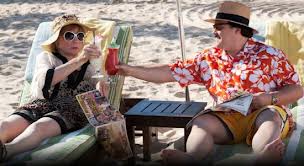 they travel the world. Eventually, she makes him the beneficiary of her estate and business manager. But, with that, her sadistic nature emerges. A couple of years go by and, one day, seemingly unprovoked, he shoots her in the back. For several months, he covers up her disappearance while giving away gobs of money in college scholarships, gifts to the poor and church donations. Inevitably, he is caught and immediately confesses. The townspeople rally to his defense, insisting that, despite his confession, he is in no way capable of committing such a crime.

So where is the A to B progression in this story? Let’s look at the plot: Although this is the story of a murder, you can’t call it a murder mystery because there’s never any question as to whodunit. No A to B there. Although it is about a crime, you can’t call it a crime drama since, with Bernie so willing to pay his debt to society, there’s no struggle of good vs. evil that leads to a feeling of triumph when the criminal is caught and put away. Not really an A to B there either. The story does offer up a triumph in District Attorney Danny Buck Davidson winning his case. But there’s little satisfaction to be had in that.

What about character? Do we see Bernie transform in a way that would give us a feeling of having arrived at B? Nope. In Bernie’s case, a meaningful character transformation would be seeing him finally rise up against Mrs. Nugent and walk away from her cruelty with no fear of reprisal. And we would cheer him for this. But it was exactly his inability to do so that led to his downfall. So, there’s no A to B in the character story.

And theme? Please? Can we have an A to B progression in the theme (so I don’t have to eat my words on Slated.com)?

This film has been compared to Fargo, and there are certainly parallels: Both are based on a true story out of the American heartland, pitting innocence against malice, and served up with an eye on the absurd. Also, like Bernie, Fargo has little to no character progression, and an unsatisfying plot triumph. So what kind of theme progression does Fargo have? At the beginning we’re presented with the notion that crime can still happen like a 1950s-style kidnapping caper with little extraneous harm done (A) only to have that illusion gradually stripped away to reveal a far more deviant world of uncontrolled violence (B). Thus, in viewing this film our understanding of the world has changed. (I discuss this theme progression more fully in an article you can find here.)

But not so in Bernie. The world of this film remains largely static, with the local folks just as convinced of Bernie’s essential goodness at the end as they were at the beginning. Furthermore, Mrs. Nugent’s hostile character is presented as an anomaly, in no way representative of humanity as a whole. It appears that the world of Carthage, Texas, is a kind and friendly place, all the way from A to, well, A.

In my Slated.com piece, I was careful to say most screen stories arrive at B via plot, character or theme – not only to hedge my bets but also because I welcome the example that finds another way of doing things. So I want to know – If the film’s director and co-writer Richard Linklater is not giving us any plot triumph or character transformation in this film, what is the B that we have arrived at instead?

Here’s what I have concluded: The B in this story is a deeper understanding of the truth, with a capital T, as opposed to the superficial facts.

There is little question about the facts: Bernie made a deliberate effort to ingratiate himself with Mrs. Nugent, then killed her in cold blood and then covered it up while spending her money wildly. But the documentary-style testimony of the townspeople paints a very different picture. Thus, hanging above the unfolding events are two opposing questions: Was Bernie carrying out an elaborate scam to get Mrs. Nugent’s money as the facts would seem to indicate? Or was he the model of kindness and compassion everyone in town believed him to be who was simply pushed to the limit of human endurance by Mrs. Nugent’s unremitting psychological abuse?

Linklater’s intention is to keep the viewer suspended between these two possible truths until well into the story. Therefore, he has to keep us at an emotional distance from Bernie rather than the usual practice of bringing the viewer into a sympathetic involvement with the main character. When we meet Bernie, he is giving a lecture, immediately setting up a professional distance, a teacher/student power differential and this weird ghoulish element in his lecture topic – how to make a dead body look good for casket viewing. We are his student, not to study the art of cosmetizing a corpse, but to study him.

Then begin the local folks testimonials, giving us second-hand information rather than getting in close to Bernie himself. It’s not until nearly 40 minutes into the film that the townspeople keep quiet long enough for us to start directly witnessing scenes of Bernie in his developing relationship with Mrs. Nugent. Also, at about this point, Mrs. Nugent makes Bernie the beneficiary of her estate. In effect, this is when the drama begins. Everything previous was background.

See, now she owns him. She can treat him however she wants. When we see her demeaning him for not having her pills and sadistically chewing when he has told her how it bothers him, he becomes our sympathetic character. By the time she unjustly fires the gardener, takes Bernie hostage by closing the gate, humiliates him for not being able to kill an armadillo and then grills him about his assigned tasks, we are no longer particularly surprised that he would pick up the gun and spontaneously shoot her in the back.

Still, he is a murderer. So Linklater reverts to the local folks to take up the story of how Bernie covered up Mrs. Nugent’s disappearance while giving away large amounts of her money. We have been pulled back to a cool distance from him. This is in preparation for what is to come next.

After several months, Bernie is, inevitably, caught and taken into custody. Then, dramatically speaking, a highly unusual thing happens – D.A. Danny Buck takes center stage. For most of the last quarter of the film, it is Danny Buck who is the sympathetic character as he tries to reason with a community full of Bernie’s fervently loyal friends. During the trial, we are suddenly rooting for Danny Buck’s sense of justice to prevail. It does, but our feeling of triumph is short lived when, in voice over, we hear Bernie say, “They gave me life. I won’t be up for parole until I’m 89,” and our sympathy is pulled back to him.

In the end, while we have seen an A to B progression from bald facts to elaborated truth, the tension between the facts and the truth is never fully resolved. We know Bernie is guilty of murder. But we are also pretty sure he is innocent of intentional malice. We can see he believed he could bring out the good in Mrs. Nugent. But that instead she brought out the murderer in him. It’s definitely true that he killed her. But it’s also true that she destroyed his life. We have to hold all these seemingly contradictory Truths in equal measure. And that uncomfortable place is the B at the end of this film. By leaving us there, Linklater creates a theme progression in the arena of ideas.

Despite its comedic undertone throughout, the film ends on the sorrowful words of one of Bernie’s more reflective elderly friends: “I don’t care what he did. Yes, I do care. It was wrong. But I believe if Bernie were truly sorry for what he did and asked for God’s forgiveness, God would forgive him and, after all, that’s what really matters. I will miss him. All of us will.”

You can watch Bernie on the following Video On Demand websites: