In February, I started writing about Oscar nominees from the screenplay categories. I wanted to find out which one I’d give the prize to, if it were up to me.  This week I’m taking a look at The Descendants, which was the winner for adapted screenplay.

First, I want to disclose that I am marginally 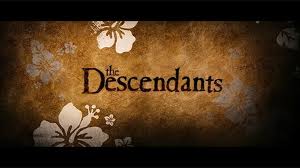 acquainted with Kaui Hart Hemmings, writer of the novel on which the film was based. The last time I saw her she was preparing to move back to Hawaii and genially invited me to visit her there. I hope the invitation is still open. I would love to congratulate her personally on her good fortune in the movies.

A novelist who entrusts her precious work to the film business has no guarantee that what appears on screen under the same title will even remotely resemble the original. Just ask Susanna Kaysen, writer of the very sensitive, reflective memoir, Girl Interrupted, that somehow turned into a high-pitched melodrama when it got to the movie theater. But Kaui got lucky. The film version of The Descendants shows tremendous respect for the novel. I think she must be very pleased.

What is curious to me, about both the film and the book, is the title. Why is it called The Descendants when the cousins wanting to sell the ancestral land to a real estate developer is the background story? In the foreground is Matt King and his wife, Elizabeth, who is in a coma, their daughters, their extended family and, eventually, Elizabeth’s lover. Why would the title refer to a story that merely underlies the main action?

I’m suddenly remembering the old Joni Mitchell song about paving paradise to put up a parking lot, along with a pink hotel, a boutique and a swinging hot spot. What was it called? Big Yellow Taxi. Huh? What’s that got to do with paving paradise? Lyrics.com reveals that, after three verses about environmental loss, the fourth changes the subject: “Late last night I heard the screen door slam and a big yellow taxi took away my old man.” So there’s a background story of relationship loss. Then the chorus brings it all together: “Don’t it always seem to go that you don’t know what you got til its gone. They paved paradise and put up a parking lot.” It seems Joni had been to Hawaii.

Sad to realize that the message of this song, written over 40 years ago, is still relevant today. Thus, we now have Kaui Hart Hemmings and Alexander Payne toiling in the same field. But there is an interesting difference in approach. Whereas Joni said, “We will be bound to do things we regret as long as we are unable to see the value of a thing until it’s gone,” Kaui said, “If we can understand a collective loss as a personal loss, we just might be able to stop ourselves from doing things we will later regret.” Here’s the difference: Joni’s song promotes a message, Kaui’s story is infused with meaning.

Let’s face it, Joni Mitchell is being a little preachy, as was the tendency back in her day. She is instructing us, even berating us a bit, that we need to learn the value of things. She admits that she also did not fully appreciate her old man while he was still around, and the song becomes a lovely lament. But in a novel or film, the instructing and berating approach would quickly become tiresome.

It is widely held in this business that the best way to stay away from message-mongering is to stick with empty entertainment. But there is another option, one that allows for substance without sacrificing enjoyment, which is to layer a story with levels of meaning. In fact, this third way increases enjoyment since meaning is something that we humans crave. But to do this, a story must move beyond mere matters of plot.

When you think about it, there really isn’t a lot of plot in The Descendants. Matt King tells his daughter her mother will soon die and she tells him of his wife’s infidelity. He decides to find the lover and confront him. In the process, he learns the lover is involved with a real estate deal he is about to transact, although whether or not this was a factor in their relationship is unclear. Nonetheless, Matt refuses to sign the papers for the real estate deal. His wife dies and they spread her ashes at sea. In external, plot-driven terms, not a lot is happening here.

What we have instead is a character story about a man coping with the loss of his wife as he also finds out that she was cheating on him. He is learning to manage his daughters on his own. He is also managing the grief of friends and family. And he is finding his way through all his own complicated feelings, which is what drives him to find the man who was his wife’s lover and thereby learn that her lover stands to benefit from the upcoming land deal.

By bringing in the impending sale of the family land, the story expands to include a matter of concern to us all: the preservation vs. exploitation of untouched land. Some might call this a subplot, but that view prioritizes plot, and, thus, deprioritizes this part of the story. By thinking beyond plot, we can see how the land sale is equally important to the story’s overall effect.

In fact, it is the backgrounded sale of the land that the story is really about. How do I know this? Because of the happy ending. “But,” you say, “it ends with Matt and his daughters spreading their mother’s ashes in the ocean. What’s so happy about that?”

To measure the rate of happy-ending-ness in this story, take this simple test: Imagine that, in the scene with all his cousins, Matt does sign the papers, giving over umpteen thousand acres of pristine paradise to irreversible commercial exploitation. Then he and his daughters say their good byes to Elizabeth in her hospital bed. Then they spread her ashes in the ocean. Now gauge how you would feel about the overall film.

It’s a big downer, isn’t it. Thus, it is Matt’s refusal to sign the papers that makes us feel, as we leave the theater, that something has been accomplished, that loss has turned to gain. And it’s what makes the film all about the land.

The question then becomes: How does inserting a wife-in-a-coma into the story inform our understanding of the threatened commercial exploitation of a piece of paradise? For starters, it makes it personal. If you were faced with the irreversible loss of your spouse, would you perhaps think differently about irreversibly spoiling this land?

But to be genuinely personal, it has to be individual, which means it has to be complicated. So let’s make this a wife who is not easy to love. And while we’re at it we’ll throw in a couple of unruly daughters, a slacker boyfriend, an angry father-in-law and a conniving, cheating paramour. Now we have a texture of real life. But how do we tie it all together?

Matt King’s wife, Elizabeth, is beautiful and adventurous, but she’s also wild and hard to manage – a little like untamed land. Lately, Matt’s way of managing her has been to neglect her. So she has fallen in with a member of the real estate development industry for attention. What she doesn’t know is that the real estate agent doesn’t love her. In fact, he may just be trying to exploit her. In the end, it turns out that Matt is the one who loves her. But he temporarily lost track of that fact. It also turns out that he is the one who loves the land.

We will never learn to love our natural world through heavy handed berating or sentimental pleading. Just like few of us change our intimate relationships with those methods. We will need to be confronted with irreversible loss, like being faced with your spouse in a coma, to come to understand what loss really means. But, let’s not delude ourselves. To compare environmental loss to the loss of a spouse for whom you only have pure, selfless love doesn’t give the whole picture. The best way to tell this story is through a painful, agonizing love. This is what it will take to protect our environment – a lot of pain and agony and learning to finally put our self-centeredness aside.

At least, that’s what this film is telling me.

You can watch The Descendants on the following Video On Demand websites: